Will Smithey has been lifelong friends with Blake Chitwood.

“We first met each other in first grade when we sat by each other on the bus, our dad’s were already friends because they played on a men’s softball team together,” Smithey said.

Smithey and Chitwood quickly developed a friendship because of their love for baseball. They both proved to be among the best at an early age in little league, and Chitwood’s dad created an all-star team when they were in 2nd grade including Chitwood and Smithey. When they were in 5th grade, they no longer played little league baseball and put their efforts into travel baseball, coached by Chitwood’s dad. 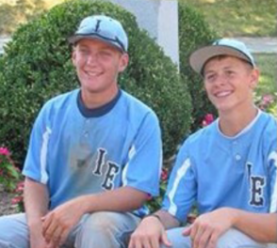 “In 7th grade we won the USSSA Tournament, which is made up of all of the teams in the Midwest, and we also won the Lynzfield Tournament of Champions in Illinois,” Smithey said.

Their travel team played in Ohio, Kentucky, Tennesseee, South Carolina, and Florida as well for tournaments.

After finishing their middle school career’s Chitwood decided to attend Roncalli High School, for the first time since 2nd grade they would compete against each other.

This year Chitwood starts at left field for Ronacalli and Smithey is the Trojan’s catcher. On opening day Center Grove played Roncalli who is ranked in the top 10 in the state. Smithey smacked a solo homerun on his first at bat of the season, and the Trojans won 4-2. Smithey and Chitwood both received offers to play baseball at the University of Indianapolis, they have decided to room together and continue their careers as teammates once again.