The fire alarm blared Thursday, Sept. 1, at the beginning of tenth period. Students, prepared for these unexpected interruptions due to regulatory measures and construction, did not recognize anything was amiss.

It was not until students were being filed into the football stadium that they realized this was something different.

“The fire alarms went off because the heat in the kiln room hit the threshold to set those off. With the nature of a kiln, that fires ceramics, there’s fire in the kiln to start with, but the heat in that room just became quite excessive and set off the alarms,” Principal Doug Bird said. “The firefighters came in there to address that situation and they did a great job in helping us out. Probably the most responsive I have ever seen them.”

There was no unnatural fire causing the heat. The kiln was working fine, but there was a malfunctioning exhaust vent.

Joseph Zollinger, a Ceramics 2 student, shows his ceramics project to Sarah Marrow behind the camera. “All of the projects that were in the mid kiln was next to the high fire kiln, due to the heat shock from the water, caused my projects to turn out differently than what I wanted,” Zollinger said. ” They flaked, they folded, they did not turn out the color they were supposed to be.”

“An exhaust fan inside of the vent hood stopped working, temperature in the kiln room increased, triggering the fire alarm,” Ceramics Teacher Nathan Fry said. “The kiln was running properly, just the kiln room got too hot.”

The only known damage was to the ceramics projects in the kiln.

“As to the ceramic wares that were in the kiln, due to the heat shock, most of them shattered,” Fry said. “It is likely the kiln has also taken damage but I don’t at this time have a full evaluation of the damage sustained.”

“Smoke” that students may have seen in the Hall of Excellence and the art hallway was steam created by the water making contact with the hot surface.

A snapshot of how students reacted on Snapchat: 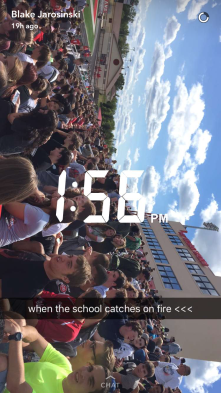 Students evacuate the school at the beginning of tenth period. Blake Jarosinski captures the moment in a picture when everyone has been moved and settles into the football stadium.

Fire drills are nothing new, and with construction they are fairly common. Students such as Jacob Bridgewater were surprised to find the fire evacuation on September 1 to actually be real. 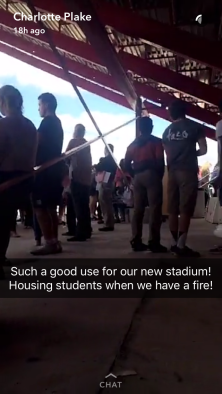 Charlotte Plake comments on the many uses of the new football stadium.

Students are seated in the bleachers of Ray Skillman stadium for the entirety of tenth period. Photo courtesy of Tori Baer

Leslie Fisher watches the firetrucks roll into the parking lot.