Like most great ideas, it began with a challenge.

“We had our Genius Hour project, and I wanted to do something to help kids,” junior Olivia Wright said.

“Genius Hour,” which is part of the curriculum in English teacher Lesley McDougal’s Early College classroom, allows students to independently explore a passion and form that interest into a project, such as an event or seminar.

“My mom told me how she was able to set up a basketball tournament at [Indiana State University] that is still running. I wanted to be able to do that for our community,” Wright said.

The community rose to the challenge, with two gymnasiums at Center Grove Middle School North packed full on both Friday afternoon and Saturday morning.

Jasper, an CGMSN student, was diagnosed with Acute Lymphoblastic Leukemia on March 3, 2016.  He has been receiving treatment ever since, and will continue far into the future. 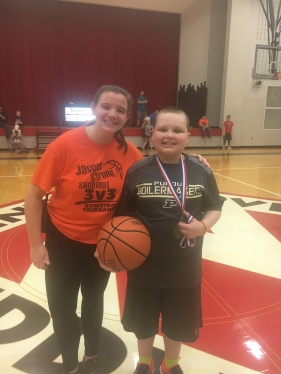 “[Jasper] is close friends with my brother,” Wright said. “When I learned last year that he had leukemia, I was very upset and I wanted to do something about it, and I knew a lot of people in the community wanted to as well.”

The plans were put into motion.  The school was booked, signups were posted and sponsors began to file in.

“I never imagined it would turn into something this huge,” Jen Lenglade, Jasper’s mother, said.

Over fifty teams participated this weekend.

“Olivia did the whole thing, I honestly have no clue what all she is done.  She just told me ‘I’m taking care of it,’ and she did,” Jen said.

Since Jasper’s diagnosis last year, many Center Grove organizations have shown their support for his fight.

“We are blessed to be in this community. From the football team to the basketball team, CGBBL, CGBFL, all of our friends and family and even people we don’t know have done things.  I don’t think there is a better community we could be in,” Jen said.

Multiple high school students signed up to take part in this event, whether it was as players or volunteers.

“It’s just a great thing to do, to help raise money for someone who isn’t doing too well ” sophomore Lucas Doyle said.

Though Wright was the event coordinator and mastermind behind the entire tournament, she had help.

“I’m also part of Riley Club, I really enjoy putting on the Riley Dance Marathon every year,” junior Emma Jones said. “So when Olivia told me about this I was like ‘yeah, I’m all in.’  I helped her get some sponsors, and I just try to be as supportive of I can.  Right now, I’m in charge of running the scores back and forth.”

Jasper himself frequented the event all weekend, whether it was playing, cheering on his friends or coaching his Dad’s team.

“The concession stand [is my favorite part], because I get free candy,” Jasper said.

Free candy for Jasper and the support of an entire community rallying together under one cause: it doesn’t get much better than that.

*The tournament far exceeded their original goal of 10,000 dollars for Jasper’s family.  The total was over 12,000 dollars.*