In their first game against the Carmel Greyhounds (1-2) since losing in the 2016 Class 6A State Championship game, the Center Grove Trojans (2-1) defeated their MIC rivals by a score of 31-10 behind freshman Carson Steele’s 268 yards and three rushing touchdowns.

The first quarter action was limited to a 29-yard field goal by junior Luke Eckert that fueled the scoring streak for CG. The Trojan defense, which held Carmel scoreless in the opening quarter, forced Carmel to punt with less than two minutes in the quarter, setting the Trojans up for a second quarter start with the ball.

A six-play drive sparked by junior Jackson Moore’s 43-yard pass to junior Jacob Keith set Steele up for a rushing touchdown, his first of the night. 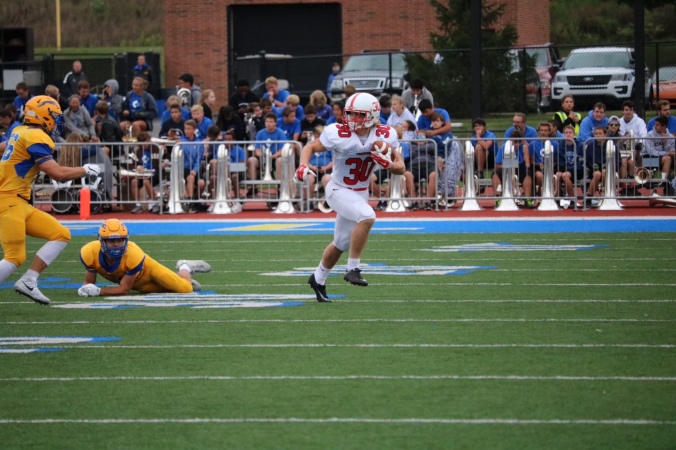 The Greyhounds, allowing 31 points for the second time this season, managed to score on a passing touchdown with 6:03 remaining in the half. The touchdown would be the only one for the 2016 6A champions, as the Trojans defense secured their second win of the season.

“Today was just all about going out and punching them in the mouth the first play and not letting up. Our defensive key was to trust our players in doing their job,” said senior linebacker A.J. Gin.

On the first play of the drive after the Greyhound’s touchdown, junior running back Gavin Matheson ran the ball 80 yards for another Trojans’ touchdown, bringing the score to 17-7.

The Carmel offense struck one last time, landing a field goal with less than two minutes left in the half, closing the score to 17-10 at the half.

The third quarter brought out the best in Steele, as he ran for 162 yards and 2 of his 3 touchdowns, including a 96 yard dash on 1st and 23.

As the Trojans looked to end the third quarter with a punt, punter P.J. Buck was hit after the kick, resulting in an untimed down for the Trojans. Taking advantage of the penalty, Steele took the ball into the end zone for his third rushing touchdown of the night, capping off the 31-10 win for Center Grove.