The grinding of metal against waxed concrete. Dodging annoyed pedestrians. The smell of melting wax on a hot day. Wearing out countless numbers of shoes. The snap of a board after trying a trick for hours. The feeling after finally landing it.

This isn’t Julian Derosas’s first time on a skateboard. Derosas started skateboarding when he was just seven years old.

“Basically my friend from my old school [Whiteland] had a skateboard and it was laying in his garage,” Derosas said. “I noticed it one day and thought it was cool, so he started doing some tricks. I didn’t know how to do anything so later that week I asked my dad to get me a skateboard. We went to Dick’s Sporting Goods, and I got a really, really bad skateboard but it ended up working out.”

Derosas learned to love skating because of the freedom and how it’s unlike any other sport; there are no rules.

“I love not getting told what to do,” Derosas said. “In any sport, coaches yell a lot and give orders to the players to do certain things, especially competitive ones. Skating has a goal, and once you meet that goal, you make a new one. There are so many combinations of tricks possible.”

Derosas has put in countless hours of skating to master new tricks, which has been rewarding.

“When I was younger I used to skate every single day but once I got to high school and became busier I started skating about three days a week, mostly on the weekends,” Derosas said. “Including the different combinations of tricks, I can do about three hundred. There is so many ways you can do tricks. That’s why skating is so unique.”

“I started filming because I wanted to see what my tricks looked like and what I looked like when I skated,” Derosas said. “For a year, nobody skated with me so I just recorded myself with my dad’s old camera.”

What started as just sitting his camera on the ground while he skated to see what the tricks looked like turned into something much more complicated.

“I saw a guy on Instagram post an edit that had a lot of repetition of a trick, slow motion, zooming in and out and a lot of other features,” Derosas said. “It inspired me to play with my filming more and start making edits. I post everything I make on Instagram.” 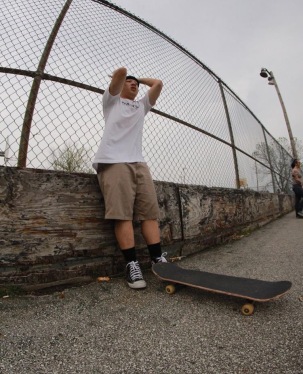 The Instagram posts have slowly turned into something more complex. Derosas and his friends have been collaborating for three years on a film project.

“Me and my friends decided to make a skate video of us just skating,” Derosas said. “It’s going to be an hour long so it’s like a movie. We’ve been filming for three years but there have been a lot of breaks in between because of cameras breaking or my grades going down so my parents wouldn’t let me skate. We’re working our butts off to make this video look good because it’s our first time making a full-length video. It will be dropping by the end of February.”

He will be featured in the video independently along with 25 of his friends at the premiere, which will take place at Minus Skate Shop.

“When you drop a full-length skate video, everybody has their own part,” Derosas said. “It shows what you’ve been working on for how long you have been filming so for me, three years. It shows how many tricks you can do, the style of music you listen to and how dedicated you are.”

From age seven to 18, Derosas has been practicing and perfecting his skating skills. The hundreds of hours of work and determination will all be showcased in his four minute slot of the skate video.