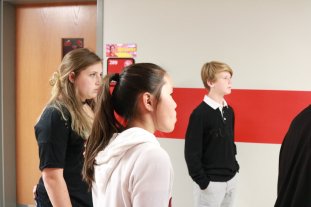 Many students choose to take a foreign language course during their high school career, but few take them on as extracurriculars. Members of Chinese Club are different, however, because they opt to immerse themselves in the Chinese language and culture outside of the classroom.

“In a broad sense, Chinese Club is exploring various elements of Chinese culture,” club sponsor Christopher Blackburn said. “The focus is going to be language, so we try to encourage students that are taking Chinese one, two, three, or four to participate in Chinese Club. However, we also enjoy bringing people in from outside the Chinese language program to experience different elements of Chinese culture.”

“Chinese Club is a way for us to dig a little deeper into what we can’t cover in class,” Hagedorn said. “We normally study the culture. It’s open to anybody who wants to learn more about China. We typically try and plan a different cultural activity every other week. Sometimes we’ll watch a movie, sometimes I might give a presentation about China, it just depends on what the leadership wants to do.”

“Some of the things that we look at are festivals and holidays,” Blackburn said. “At one or two Chinese Club meetings this year, we’ll make some Chinese style foods. We also look at doing some other elements of Chinese culture such as calligraphy with a calligraphy brush, and we watch two or three Chinese movies. It’s usually a pretty good turnout.”

The club has some goals for this year that Hagedorn hopes to achieve.

“My goals for the club this year are to try to make everyone want to learn more about China outside of the club and also to help get them more involved in becoming a world citizen,” Hagedorn said.

Chinese Club has seen some extensive growth since it first began four years ago. Starting with a group of three students and Mr. Blackburn, Chinese Club attendance has blossomed to almost thirty students. The club was once teacher-led, but now a council of seven to eight students takes on the responsibilities. Despite these large numbers, Chinese Club is looking for more participation.

“The goals for the club are to continue to grow it,” Blackburn said. “We meet in this room, but it would be awesome if one day Chinese Club gets so big that we have to find a different venue.”

Whether or not students are enrolled in a Chinese language class, Chinese Club is a great opportunity to integrate all students into the elements of Chinese culture. Chinese Club meets every other Thursday in Mr. Blackburn’s room.