Seniors Phoebe Nguyen and Mia Nunokawa are the founders of the new Cultural Unity club, which is a way for students to discuss world cultures and differences with their peers.

about them and learning about the food that goes with them,” Nguyen said.

Members of the club are preparing to discuss many cultural topics this month.

“This time we are talking about Chinese New Year,” Nguyen said. “We will discuss what Asian culture does to prepare for it. This month is also Black History Month so we will talk about that at our next meeting. We just focus on different aspects of the world.”

Though some other clubs also work to inform students about global topics and issues, this club is different.

“I think the major difference between us and other clubs like Koppi is that we look at different countries from an actual cultural point of view instead of a political one,” Nunokawa said. 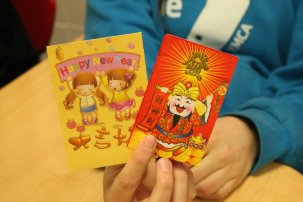 When the two seniors got the idea for the club they enlisted the help of English teacher Krista Hensley, who has discussed different cultures with students in and out of the classroom.

“When Phoebe and Mia both came to me and asked if I would sponsor, they already knew that I would say yes,” Hensley said. “This is because of what I talk about in my class, it is very important to understand our global differences so we talk great depth at the importance of understanding race, culture, history, family, and those who have differences from us. And when they came to me, I just knew it was something I wanted to do.”

The club meets every other Monday during STaR and is still welcoming new members who are interested in learning about world cultures.