While most high schoolers are still making decisions about their futures and their careers, sophomore Jacob Martin already has his future planned out.

“I started out playing with LEGOs as a kid and it just went from there,” said Martin.

Martin has been interested in construction since 2012, and since that time, he has done more in the field of construction in the past few years than many people will do in their whole lives.

Martin took a construction class here at Center Grove, where he learned how to build and construct a table. “It was fun, getting to work with friends, it was a challenge,” said Martin.

Now, he takes Intro to Engineering and Design with teacher Brent Schulz, where he uses computer aided design software to create and 3D print objects of his choice. 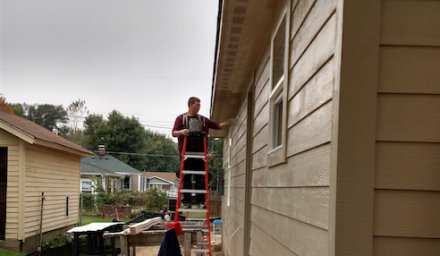 “It’s interesting how it works, the technology and how far we’ve come in the past few years,” said Martin.

In addition to the work that he does at school, Martin pursues his future outside of school as well as in school. “I had a carpenter job over the summer and I have helped build houses,“ Martin said.

For Martin, construction is not just an outlet for his innovation, it is a way for him to give back to the community. He takes pride in his ability to create things for people.

“It’s fun,” Martin said, ”the thought of being able to build something for somebody that they are going to live in.”

Although construction is something that Martin loves, he is widening his possibilities. “I already know everything that C9 teaches, so now I’m going into welding,” Martin said.

One thought on “Sophomore Jacob Martin plans out future”