Tonight the football team will face off against Cathedral on Senior night. Last year the Trojans suffered a disappointing 21-14 loss to the Irish in a game that saw CG lose three fumbles. However, quarterback Jackson Moore threw for a career best 150 yards and two touchdowns. In the past three years the Trojans are 2-1 against the Irish and will look to improve on that record tonight at Ray Skillman Stadium. The game is scheduled for a 7 p.m. kickoff with senior night festivities beginning at 6:10 p.m.

The Trojans defense will look to slow down Irish wide receiver Bo Sanders tonight. Sanders ranks 16th in the state for total reception yards and third in touchdown receptions. Another threat will be running back Chon’dre Dissel who stands at just 5’4” but averages nearly six yards a carry and a touchdown a game. 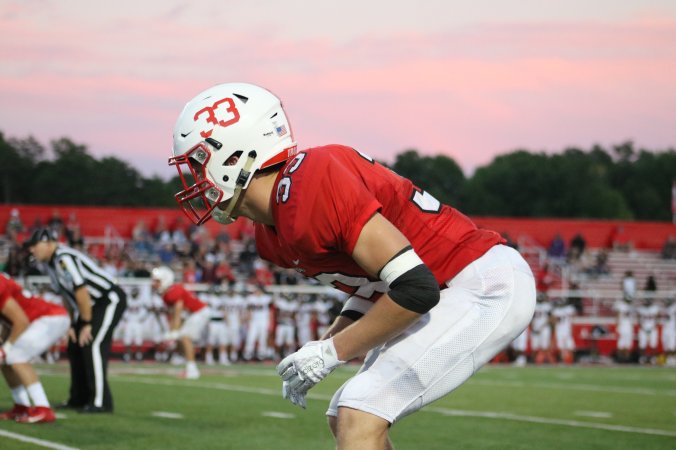 “They are super fast and super strong, but tonight is all about us. We have prepared and know that they have great skill players that we need to slow down,” senior defensive back Matt Pence said. “It’s all about the team and going out there and fighting for the seniors.”

On the other side of the ball, Trojan running back Carson Steele will look to keep his hot streak going as he has rushed for 10 total touchdowns in the last three games, as well as averaging 249 yards a game over that span.

Tonight is also the last night the senior football players will run out of the Trojan football helmet to thousands of fans yelling for them.

“It’s one last friday night home game. The playoffs could shake out weird and this could be it. You never know if you’ll play another home game again, so we are going to give it all we got and put a show on for everyone,” senior quarterback Jackson Moore said.

The Center Grove seniors have had success against the Irish and the team is on a winning streak.

“I am looking forward to beating the Irish one more time and finishing our season 6-3 with four straight wins, leading us into the playoffs with confidence and in full stride,” senior offensive lineman Cameron Petty said.

The Trojans come into tonight’s game having won their last three MIC conference games by an average of 21 points and sit at 5-3 overall. They are ranked as the #7 team in Indiana per maxpreps.com.

Cathedral has only played four of their eight games against Indiana opponents and have not played a MIC conference team yet. They will travel to Center Grove tonight having lost their last game to St. Edward (Lakewood, Ohio) by 25 points and sitting at 4-4 overall. The Irish are ranked at #9 in the state according to Maxpreps.com.