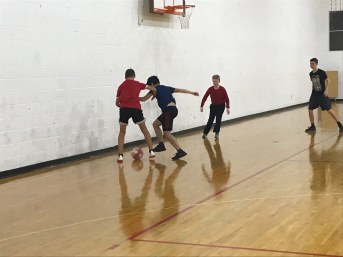 Futsal, a variation of soccer played on an indoor court, has been a club at CG for three years. The club was formed during the second semester of the 2015-2016 school year by then sophomores Lucas Kroll and Chris Santillan-Paiz during PE class.

“I had the idea and right away turned to Lucas. Together, we worked hard to turn the club from an idea into a reality and found a perfect sponsor with Mrs. Gant that helped us out a ton,” senior co-president Santillan-Paiz said.

Since the club’s founding, the number of members has grown from around 10 to almost 30 players.

“I joined the club as a sophomore when it was first created,” senior Will Pack said. “Since then, we have had tremendous amounts of people join each year, which is great because it allows us to meet new people and competition to play against.”

Officially, futsal is a five-a-side sport and is played with a smaller-sized soccer ball. At Futsal Club, the rules have been adapted to fit the club’s style. Each meeting the players split up into three separate teams and then play short six-minute games with the winner staying and playing the other team.

“My favorite part about futsal is being able to come once a week to play soccer with my friends who can advise me on how to improve my soccer skills. The club also helps keep me in shape,” sophomore Jonah Ellinger said.

Futsal may be a recreational club, but many of the meetings turn highly competitive. With the winner-stays rule, many times the games go down to the wire with 1-0, 2-1, and 3-2 scores being very frequent.

“Futsal gets pretty competitive, but not in a negative way,” senior Sarah Bettenbrock said. “It’s always craziest when we play with three teams and the winner stays on because everybody wants to get the most playing time possible. In the end, we’re all there to have some fun and be with our friends. It’s just a great atmosphere.”

The club, which meets every Tuesday, is open to new members all year.