Kennedy Roberts ‘19 spins while throwing discus. Though she didn’t place in discus, Roberts placed third in shot put with a throw of 27’2”. 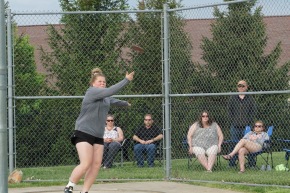 Ella Rasche ‘21 sends the discus flying, winning the event with a throw of 93 feet. 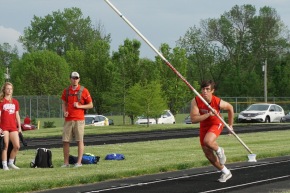 Connor Burries ‘22 runs down the runway while competing in pole vault. Burries won the event with a jump of 10 feet.

Michael White ‘22 leans across the finish line, winning his heat in the 200 meter dash.

Andreus Mulldore ‘22 stands watching the starter at his blocks before the 4X400 meter relay.

Secillia Brooks ’22 dashes along the first turn of the open 400. Brooks placed second in the event with a time of 1:06.2.

Click on the pictures to learn more about each athlete at last night’s meet.

After losing to Franklin Community in the 2018 county tournament, the softball team is hungry to avenge their loss this year when they begin county tournament play tonight. Many were shocked last season when the team was upset, ruining their undefeated season.

“The Franklin Community game of county is so important because we lost to them last year in county, so it’s a big game to get revenge and earn our county title back this year,” pitcher Abby Herbst ‘19 said. “The hardest aspect of the game will definitely be hitting off of their pitcher; they have a really strong pitcher so making adjustments will be hard.”

So far this season, the team is 16-3 and has accomplished many goals; one being their 15-2 run-rule win against Cathedral. However, this season has been different because of a coaching change that led to a new atmosphere for winning.

“We have focused on the process more than the outcome and how we respond to certain situations,” starting shortstop Piper Belden ’19 said. “Coach Coleman pushes us to improve mentally; she doesn’t care about the outcome as long we are bettering ourselves as players.”

Franklin Community is led by sophomore pitcher Izzy Harrison, who has an ERA of 0.92. This means that she allows around .92 runs per game to be scored on her. Harrison paired with junior Baylee Parker who has a .512 batting average creates a threat for both aspects of the game.

“I think we have been well preparing ourselves throughout the season and through facing many different types of pitching,” Jillian Ransdell said. “If we do that, we will really excel.”

With a win against Franklin Community, the team gains the momentum that will help them finish the season and continue on for their postseason matchups.

“We all just need to be super confident in not only each other but ourselves as well, and we will do great,” Jillian Ransdell ‘20 said.

Click on this photo to learn more about some of the artists and their artwork being displayed during Festival of the Arts.

If you would like to see your artwork added to our coverage, please send the following information to warnertedrow@gmail.com:

Once we receive information, we will update the Adobe Spark and you can check back to see your work displayed!

Tease your hair, do your makeup, and get those rhinestones! That’s right, it’s almost time for our school’s annual Spring Spectacular! Every year show choirs put on a final show for everyone to come and enjoy with something new to offer.

“Each year is a different theme,” junior Sound System member Elena Eberwine said. “A couple years ago was ‘Phantom of the Opera,’ last year it was ‘Chicago’ and this year’s theme is ‘Hoosier Hysteria.’”

The Hoosier Hysteria theme this year includes a mix of old favorites and new pop music.

As a member of Debtones, the all female award-winning choir, Junior Lauren Cooley said that the theme includes “pieces from Indiana’s own,: John Mellencamp, Cole Porter and Michael Jackson. We also include a section dedicated to the Indy 500.”

There is a lot of time, preparation and rhinestones that go into the final show of the year, keeping these students busy.

“We practice just about every day for two weeks on stage to prepare for the show,” Eberwine said.

The show is produced by all of the show choirs together and also accompanied by a special guest to make for a bigger and better performance and experience.

“All of the show choirs will be doing multiple singing and dancing numbers, while ‘CG Singers’ and the beginning choirs will help to feature and sing back up for the guest Josh Kaufman, winner of The Voice,” Eberwine said.

Being the last show of the year, it can be a very emotional one, especially for the seniors.

“The show is typically staged with seniors at the front, to give them a great last show on the high school stage,” Cooley said.

Spring Spectacular is an annual event so make sure to get tickets to assure a seat for an unforgettable experience.

Today, students will be able to enjoy sandwiches, salads, cookies and shakes from Chick-Fil-A as part of the Special Olympics’ Champions Together fundraiser. The items will be delivered during STaR, and 20-25 extra sandwiches may be available for purchase during lunch.

“We’re trying to raise money for the Special Olympics’ Champions Together banner,” Unified Track Coach Holly Hirsch-White said. “We have to get $1,500 to get the banner. We’re [as of May 6] about halfway to our goal.”

The money raised will go toward Special Olympics of Indiana. While this money does not directly go benefit the school, donating demonstrates the school’s support for inclusion.

“It shows that we are a school that believes in inclusion and we have activities that allow all types of students to participate,” Assistant Principal Tracy McMahen said.

The banner is one of four requirements to become a Champions Together school; the other requirements include organizing and participating in at least one unified sport, conducting at least one school-wide activity to promote awareness and respect and establishing a leadership program with students who have disabilities. Center Grove has met the other three requirements through unified track, the Spread the Word to End the Word campaign and Best Buddies & peer tutoring.

“We are already doing all the pieces that show we believe in inclusion,” McMahen said. “This fundraiser just highlights [our support] by giving recognition to programs that help people with intellectual disabilities.”

Hirsch-White, who is organizing the Chick-Fil-A fundraiser, agrees.

Besides the fundraiser, students can support athletes with disabilities by joining unified track or the unified sports club next year, or attending the unified track team’s sectional meet at Edgewood on May 18.

When senior Ellie Strube steps on the tennis court tonight for her Senior Night match against Bloomington South, it will be her final regular-season tennis competition since she’s decided not to play in college.

For the next four years, Strube, the Trojans No. 1 singles player, will be attending the United States Air Force Academy. She was recently admitted after passing an extreme physical test and showing high ability academically.

When Strube steps on campus in Colorado, she will be surrounded by mostly men. At The Air Force Academy, men make up 79 percent of the enrollment.

“I understand the difference because there is the stigma that men are more strong and they can fill more jobs,” Strube said. “I still feel like there are many things girls can do there and jobs they can fill.”

“I guess I’ve always like a structured environment so I don’t mind knowing exactly what I am supposed to do and when I need to be places,” Strube said. “Like they tell you what to wear and I like that stuff so it won’t really bother me much because I know at the end it will be worth it.”

However, Strube has not always been interested in serving in the military.

“I would say my freshman year I didn’t want to serve in the military,” Strube said. “My dad has been in the army for 36 years and we kinda talked about it again my sophomore year and I started to think I could see myself doing that.”

After graduation from the academy, Strube will either owe five years of service or 10 years in total doing flight school. Strube is not positive which route she will go or what she will major in.

“I’ve considered serving until retirement, but we will just see how I like everything and I will decide then,” Strube said.

Strube will be graduating Center Grove as a member of the Top 20 for the class of 2019. She also played tennis at Center Grove, and if she didn’t get into The United States Air Force Academy, she would have gone on to play tennis at either Indiana Wesleyan or Wright State University.